My daughters and I are usually very casual about our food.  (Remind me to tell you about Pig Night sometime.)  But we do enjoy a good high tea when we get a chance. There's something about the enforced civility that makes us feel very ladylike even if it's for an hour or so. An hour is about the longest we're able to act civilized.  We've been known to go longer but it usually ends up with drama later.

And, believe it or not, we've been to a lot of teas in the last few years: the Arboretum, the Adolphus Hotel in downtown Dallas (twice, in fact) and a couple of other places whose name I forget.  We're always on the lookout for afternoon tea.  Elizabeth and I even had high tea at Harrod's in London.  Yeah. Who would have ever thought I would enjoy high tea? I'm as surprised as the rest of you.

The custom of afternoon tea was started by the Duchess of Bedford around 1840 because she was getting hungry between lunch and dinner. So it's really Glorified Snack Time. Coincidently, a few years earlier, the Earl of Sandwich had invented the idea of putting stuff between slices of bread.  I swear I am not making this up-- Google it yourself.  So a High Tea will always have sandwiches, maybe a salad or quiche, along with some scones and maybe some kind of small dessert. A more informal Cream Tea is just tea with scones and clotted cream.

Now I know the term 'clotted' might sound  nasty but it's not.  The best way to describe clotted cream is that it's kind of in between cream and butter. It's not sour and it's not cream gone bad.  You could use plain old butter in its place or even whipped cream beaten just a hair beyond whipped. (Butter is, after all, nothing more than heavy cream whipped, churned, shaken, or whatever term you want to use, until it becomes the butter we are accustomed to. I think we've all had the experience in third grade of watching this process by taking turns shaking a jar full of cream until it became butter.  I think the teachers decided it was a good way to turn third graders' engergies into a constructive outlet.)

We had a new bistro open in my sleepy little town of Winnsboro a few weeks ago.  And they offer several levels of tea service from a simple cream tea to high tea. Oh, and tea.  Yeah...tea.  It turns out you gotta drink a lot of tea when you have tea.

There is much ceremony around a tea service.  The owner of the Winnsboro Bistro is from England and has the accent to prove it. Savor that tiny factoid a while...remembering that our closest Walmart usually carries the distinct aroma of cow manure in their parking lot.  Can you picture a transplant from the mother country in our humble little town?

I've been to the Bistro several times by now and love to take city friends with me, maybe to prove that we may live in the sticks but we can eat in Europe, if only vicariously.  One of the highlights of the tea is when Peter, the Bistro owner, tells the story of why the English put milk in their cream.

You put the milk in first.  Then add the tea.  He says the first tea cups didn't have handles and were of poor quality.  This left them liable to break when the scalding hot tea hit the cold cup, leaving your hand and lap burned.  By putting milk in the cup first,  the  hot tea never hit the cheap china; it would hit the milk first and be immediately cooled just a bit-- saving the cup from breaking. Peter also gives a warning to never accept tea that turned gray when the milk was added.  'Send it back!" he told us with great drama, "it is inferior tea."  A proper tea should be tan or light brown.

Actually, if the truth be told, my daughters and I don't really get into the whole tea part tea so much.  It's really the scones and clotted cream we're after.

My belated Mothers Day gift was High Tea at the Bistro last Saturday.  This set us in search of a good scones recipe and Emily found one somewhere online.  She made the most delicious scones I've ever had, including Harrod's in London.  High tea is all about the scones.  Maybe they should call it Scone Tea. 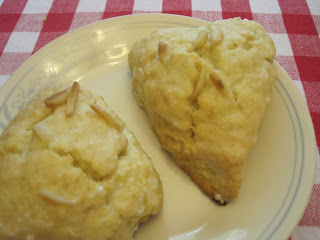 1.  heat the oven to 400 degrees
2. process 1/2 cup almonds and sugar in a blender until ground.  Finely chop the remaining 1/2 cup
3.  stir the egg, milk, cream and extract in a bowl until blended.
4. whisk flour, ground almonds, baking powder and salt in another bowl to combine. add the butter to this bowl and toss to coat it with flour.  With fingertips, rub in the butter until coarse crumbs form
5.  add egg mixture, stir until a dough forms.  stir in the chopped almonds.  knead the dough 10 times.
6  turn dough out onto a floured work surface.  divide in half.  working with one piece at a time, pat the dough into a circle 5 inches in diameter.
7.  cut the circle into 6 wedges.  brush the tops with water.  top each scone with a few sliced almonds.
8.  bake 20 minutes on an ungreased baking sheet or until golden.

I decided an glaze was in order.  So I took about a tablespoon or two of almond extract along with about 3 TBSP of milk and slowly added powdered sugar until it was thick but flowing.  I dipped the tops of the scones in this to cover just the top then set aside to harden.

Times are hard.  Who would ever think violence in Mexico could affect the quality of PTA cupcakes?

Last year's mission trip to build houses in Reynosa got cancelled because of the drug war violence.  This year's trip still is up in the air.  And these trips weren't just to build those houses.  Nosiree bob.  The trip also furnished me with a year's supply of cheap but great vanilla.  And now, dearhearts, I have officially run out of the good stuff.

Three years ago I took a cooking class here in the sticks where the average housewife does not make annual trips to Mexico nor can afford a gourmet shipment of Martha Stewart-grade vanilla.  She either settles for the stuff at Walmart or she makes her own.  The cooking teacher told me to go out and buy a pint of cheap vodka and throw in 3 or 4 vanilla beans.  This lady had won more than a few State Fair ribbons for her pies and cakes so I figure she knew what she was talking about.

She told us the vanilla would be ready in three months.  I wrote the date on the bottle and for a few months I would check it from time to time, unscrewing the bottle then sniff and swirl and sniff.  It just smelled  like vodka.  Which, if you have noticed, doesn't have much of a smell.

I went back to  using the Mexican stuff since I had it.  But tonight the bottle was enpty and things got desperate.  And there was a cake to ice.  I had no other option.  I prayed and opened the vodka vanilla.  To my happy surprise, three years later it is every bit as good as what I was buying in Mexico.

I remembered that the cooking teacher said I should give the bottle a little shake every single day.  But there is a huge "Out of Sight, Out of Mind" factor in my kitchen and I never tended to the brew.  So, I'm thinking it might not have taken three years to produce decent vanilla if I had been a smidge more attentive.

Get your vodka and beans.  It may take you some time but I've learned it will be worth it. At least until we can get the drug wars in Mexico to die down.
Posted by Jane at 4:23 PM 1 comment: