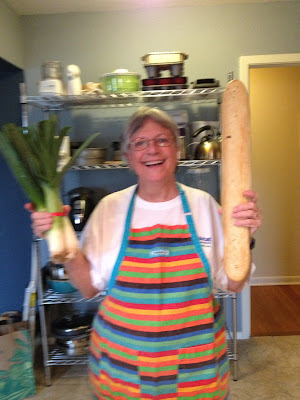 Once in a while Elizabeth and I like to try a new recipe so we do what I call a "Buddy Cook" at her house and make it. Sometimes we come to my house but it's usually a holiday weekend and there are a lot of other people around and it can get hectic.  It's much more civilized at her house.   And, certainly if knives are involved you want the atmosphere as civilized as possible.


I have been watching a lot of Ina Garten, the Barefoot Contessa, on TV. She makes everything look so easy.  And, actually, this one is pretty easy.  Except for finding the Brandy and Dry Sherry.

Since Texas has started allowing beer and wine to be sold at the supermarket the liquor stores are going out of business right and left.  I drove past three liquor stores that had been closed until I found one still open.  Even it was in the process of going through bankruptcy and the walls were almost bare.  The best I could find in Brandy was four of the little airplane sized bottles. Folks, you know I've quit drinking.  You're going to have to get in there and do your part to keep the liquor stores alive. There is nothing sadder than a half-stocked shelf in a liquor store.

The seafood stock was on the shelf at Whole Foods in the yuppie part of Dallas.  Later I found it in the soup aisle at my Walmart out here in the boondocks.

Ingredients
Directions
Place the shrimp shells and seafood stock in a saucepan and simmer for 15 minutes. Strain and reserve the stock. Add enough water to make 3 3/4 cups.
Meanwhile, heat the olive oil in a large pot or Dutch oven. Add the leeks and cook them for 10 minutes over medium-low heat, or until the leeks are tender but not browned. Add the garlic and cook 1 more minute. Add the cayenne pepper and shrimp and cook over medium to low heat for 3 minutes, stirring occasionally. Add the Cognac and cook for 1 minute, then the sherry and cook for 3 minutes longer. Transfer the shrimp and leeks to a food processor fitted with a steel blade and process until coarsely pureed.
In the same pot, melt the butter. Add the flour and cook over medium-low heat for 1 minute, stirring with a wooden spoon. Add the half-and-half and cook, stirring with a whisk, until thickened, about 3 minutes. Stir in the pureed shrimp, the stock, tomato paste, salt, and pepper and heat gently until hot but not boiling. Season, to taste, and serve hot..

Serve it with baguettes of French Bread and some butter.  This should serve a whole lot of people. But if there's only the two of you then you don't have to share.  I especially liked sitting in Elizabeth's living room and watching an episode of Ina on TV and dipping chunks of buttered bread into the soup.   This recipe is a keeper. And I found the flavor got even better the next day after it sat a while. 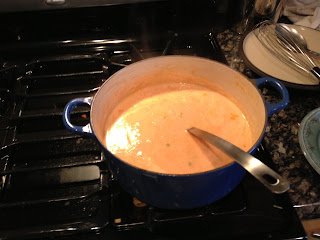