I got this recipe from Linda Terpstra who got it from a cookbook.  I think she said it might have been one of those Dallas classics like the Arboretum or such.  But it's such a basic I figure it's in every cookbook in America.  I loved the mushroom soup at Monk's Oven restaurant and when they closed the restaurant, I told Shannon Monk I wanted her to give me the recipe.  But she said it was in another cookbook and I could find it there.  So apparently, it's not any big secret.

Linda and I use 4 tablespoons of flour.  I also only use 1 cup of whipping cream so that it's slightly thicker.  I also throw in a dash of sherry.

It freezes well so when I make it, I always freeze the leftovers in 1-pint Ziplock bags.  It's great for an impromptu fancy lunch. 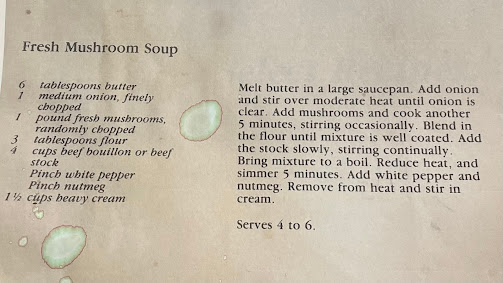